Mill Valley remained small though the 19th century, with about 900 residents in 1900, when the city was incorporated. After the 1906 San Francisco earthquake, the population began to grow and the present town developed.

You can find interesting histories of Mill Valley on the Internet; for example, at the Mill Valley Historical Society and Wikipedia sites. 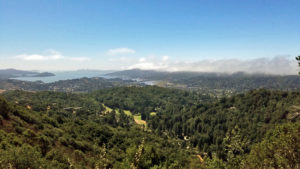 The median household income in 2016 was about $154,600. 73% of residents 25 years and older have a bachelor’s degree of higher, about twice the California and national levels.

Cost of living in Mill Valley is estimated at 277 relative to 100 for the nation and 137 for California.

Mill Valley has a mild climate with cool, wet winters from November through April, and dry, warm summers. Summer coastal fog often cools the area at night and in the morning, clearing in the afternoon. In general, Mill Valley has more foggy and overcast days than other parts of Marin. The cool, foggy days support the growth of redwood trees that contribute to the city’s charm.

Mill Valley is served by Marin Transit, with destinations within the county, and Golden Gate Transit, providing bus service to San Francisco. While both bus services have stops along Highway 101 , some buses provide service directly to downtown:

Mill Valley is a suburban, commuter neighborhood with a high percentage of highly educated, high income residents. The local economy is focused on services.